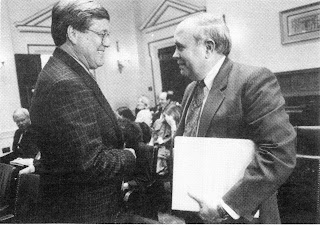 When people “Google” my name, “Management and Financial Irregularities in the Office of the Chief Administrative Officer” pops-up. My supporters know the real story behind this report while my detractors use it as a handy device to dismiss everything I say and write.

This report was the third of four audit reports related to my tenure. It is a saga discussed in detail in my book “Naked Emperors”. For those who have not read the book, and even for those who are familiar with the story, a “SparkNotes” version of what happened is in order.

My book focuses on the forces for and against reforming the U.S. House of Representatives after the historic election of 1994. The four audits became battlegrounds for these forces to collide in shaping the reality of the moment.


Audit #1 – Price Waterhouse – Report No. 95-HOC-22, July 18, 1995.
This is covered on pages 237-238 in “Naked Emperors”.
This report was billed as the first truly independent audit of the U.S. House of Representatives. All prior reports were internal or heavily influenced by House Leadership and especially by the Committee on House Administration (CHA).

The report was an historic indictment of previous mismanagement of the Congress. Price Waterhouse found such a lack of policies, procedures, and documents that it could not render an opinion. This report would serve as the basis for the reform of the House and a validation of Leadership’s and my approach to strategic change. Surprisingly, Rep. Bill Thomas (R-CA) as Chairman of the new Committee on House Oversight (CHO) chose to suppress any release and media coverage of this major document.

House leaders and I thwarted Thomas’ subversion and got the story out to the American public. In retrospect, Thomas’ attempt at sabotage was about crippling the reform effort so that little or no change would actually occur. He had been forced by House leaders to finally acquiesce to some key reforms in June, his stalling tactics having delayed these reforms since March. Thomas was furious that the July audit proved his effort to preserve the status quo was ill advised.


Audit #2 – Price Waterhouse – Report No. 96-HOC-05, July 30, 1996.
This is covered on pages 270-273 in “Naked Emperors”.
This report was poised to give the House a “clean” audit. However, at the last minute, Thomas refused to update the CHO’s mass mailing procedures, thereby downgrading the report to a “qualified opinion”. Allies of the reforms considered this further sabotage by Thomas.

Thomas also tried to force Price Waterhouse to criticize the way the reforms had been implemented with specific attacks on my team and me. Thomas threatened to end the Price Waterhouse contract if they refused. This highly unethical and possibly illegal effort was exposed and the Speaker took Thomas to the “woodshed” during a meeting of the reform leaders. However, no other sanction occurred and Thomas continued his efforts to tarnish the reforms.


Audit #3 – KPMG - Report No. 96-CAO-15, December 31, 1996.
This is covered on pages 283-291 in “Naked Emperors”.
Thomas proceeds with hiring a more malleable group of auditors (KPMG) to attack the reforms and the CAO. KPMG is given the deadline of having their criticisms of the CAO and the reforms published in time for the House Republican Conference's consideration of House Officers for the 105th Congress. I uncover the plan and appeal to the John Lainhart, House Inspector General, to be an honest broker in the matter. The IG reports back to Thomas, who uses it as a way to remove me as CAO. The reason given for my removal was “inappropriate” ex parte contact with the IG, a minor version of what Thomas was caught at in August without any sanction.

I wrote a fully documented rebuttal to the audit report (available on www.scotfaulkner.com ). This rebuttal was never included in the report.


Audit #4 – KPMG - Report No. 97-HOC-12, September 24, 1997.
This is covered on pages 292-294 in “Naked Emperors”.
Thomas decides that purging me, and my inner circle, is not enough. In order to consolidate power in the newly revived Committee on House Administration (CHA), Thomas needs to completely revise history. He demands a special IG report describing the CAO and his allies as hampering House reform and portraying Thomas and the CHO as the true leaders of the reforms. Thomas also wants to erase my credibility in Washington, DC. Dozens of CAO staffers and reform allies alert Newt Gingrich to Thomas’s power play and his misuse of House resources for personal vendetta. Gingrich, once again, does nothing to curtail Thomas. While media accounts, and several books describe what really happened in the 104th Congress, the final IG report remains the first item found on some web searches.

Thomas achieved his goals, going on to be a major power in the House, and ultimately cashing-in for a lucrative lobbying position.
Posted by Scot Faulkner at 3:10 PM