A Hundred Years in Iraq 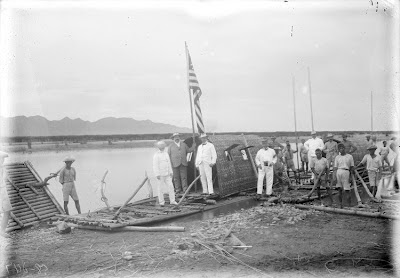 On Thursday, January 3, Senator John McCain admitted that he would not be surprised if America remained in Iraq “for a hundred years”. He defended his statement on “Meet the Press” on Sunday, January 6. In both cases, McCain cited South Korea and Europe where U.S. forces are posted decades after hostilities ended.

It would be more instructive had Senator McCain reached further back to a more applicable precedent – the Philippines.

In 1898, President William McKinley used questionable intelligence about the sinking of the Battleship Maine to go to war with Spain. Linking Spain and its colonies to what later proved an accidental coal dust explosion in a ship moored in Havana, Cuba is very much like the arguments linking Iraq to 9-11 and Al-Qaeda.

Just like in Iraq, the U.S. assumed that they would be welcomed as liberators as they were ending centuries of brutal Spanish colonial rule. The U.S. even transported Philippine independence leader Emilio Aguinaldo from his exile in China to help rally local forces against the Spanish. However, relations soon turned sour as Aguinaldo and his independence forces wanted immediate self-rule, not an interim U.S. occupation.

Instead of “mission accomplished” the U.S. found itself fighting insurgents for four years. The capture of Aguinaldo on March 9, 1901 did not end the struggle as other leaders emerged. In fact, even though the U.S. declared a formal end to the “Philippine-American War” on July 2, 1902, various insurgent groups sporadically arose to fight Americans until 1913. There were nearly 7,000 American military casualties. Over 20,000 insurgents were killed along with 200,000-1.5 millian Philippine civilians. U.S. forces caused the deaths of more Filipinos in fifteen years of fighting than the Spanish had during their 300 years of colonial rule.

The U.S. remained a major presence in the Philippines governing it first like a territory and then as a commonwealth until driven out by the Japanese in 1942. Once U.S. forces defeated Imperial Japan policy shifted to promoting independence. The first free elections in a fully independent Philippines were held in April 1946, forty-eight years after the U.S. invaded the country.

The U.S. continued to maintain major military bases in the Philippines, including the Subic Bay naval base. The eruption of the Mount Pinatubo on April 2, 1991 buried much of the naval base and led to the U.S. ceding its last military outpost to the Philippines’ government in December 1992, ninety-four years after the U.S. invaded the country.

It is somewhat ironic that McKinley is President George W. Bush’s and Karl Rove’s favorite President. It is unfortunate that they decided to re-enact his Philippine venture in Iraq. Also, there are no volcanos in Iraq to help us close-out our presence in the year 2103. At least not geological ones…
Posted by Scot Faulkner at 11:41 PM